Man, I died in that race!

A common complaint among younger, and some older swimmers is “I can’t seem to finish my races.”  The initial diagnosis is usually “You just need to get in better shape.”  The solutions then involve increasing training both in and out of the pool.  While that may be a viable fix, the real problem often lies in poor core position throughout the race.  When a swimmer cannot maintain an efficient, horizontal position in the water, they tend to decelerate more rapidly as fatigue sets in.  Thus the end of the race becomes more difficult to complete.

Bill Boomer and Milt Nelms did a wonderful job of creating awareness of the importance of developing core-controlled balance, positioning, and stability.   If the swimmer relies on the arms and legs to help create an efficient body position throughout the stroking cycle, then the arms and legs are performing two tasks:  1) creating a balanced, horizontally aligned torso; and 2) propelling the body through the water.  If the first task can be primarily accomplished by utilizing core and adjoining muscle groups, then the arms and legs are more free to focus on creating velocity.

Many stroke flaws are sometimes a result of a lack of “internal” core control.  A wide out-sweep on the catch in freestyle, overreaching during the backstroke entry, and low hips throughout the breaststroke and butterfly are but a few examples.  In my opinion, it is important to take the time to look at the ability of the swimmer to create an efficient platform without the assistance of the arms and legs.  This should begin with learning how to float.  It is amazing how many swimmers are inept at being able to lie motionless in a horizontal position either in a prone or supine position.  The want to use arms and legs to help them “balance.”  I believe this tendency continues when they are swimming.  As a result, the arms and legs perform a dual role.  It is always interesting to watch young swimmers “working” to figure out how to float.  I believe that in this process they are creating new neural pathways that will allow them to incorporate greater control of their core while they are swimming.

It is understood that some people simply cannot float.  Lack of buoyancy, length of legs, high percent of lean body mass, all can be impediments to floating.  Nevertheless, it is important for these swimmers to work on the same core stability skills in order to enhance their ability to stay more horizontal throughout the race.  Utilizing floatation aids such as pull buoys or foam noodles can aid the low buoyancy swimmer to better understand the role of their core in creating efficient body position.

Let’s begin to learn how we learn!

CAN YOU RIDE A BIKE?

Humans are capable of developing high levels of ability and efficiency in a wide range of skills. So what does it take to become a highly skilled performer? First and foremost it is important to understand how we learn. When we attempt to do new things, the brain begins to work, both consciously and subconsciously, to connect all of the brain cells (neurons) responsible for performing that skill. The stimulus of trying to perform a new skill causes the brain’s cells to interconnect with one another in order to exchange “information” necessary to the performance of that task. They do this by sending out new “feelers” known as axons.  These axons begin connecting with one another and thus creating new neural connections. As the task is repeatedly practiced the brain “insulates” these connections with a substance called myelin. Myelin causes the connections to exchange information more rapidly…..the more myelin, the greater the skill level. The more you practice the skill, the more your brain remembers and sets that skill in its memory.

A great example of how this works is learning to ride a bicycle without training wheels. 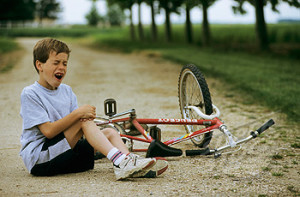 Some basic skills are developed when learning to ride a tricycle and then a bicycle with training wheels. Once the training wheels come off the next new set of components are added. Many kids struggle with the process of “figuring out” how to ride the bike without the training wheels.  Some even get injured in the process. This year I met a young boy who told me he spent a week in the hospital due to an accident that happened when he was trying to learn how to ride his bike. I asked him whether he ever learned how to do it.  After all, he had injured himself and the easy thing would have been to quit trying. He replied that he did learn.  So I asked him “If you injured yourself so badly why did you continue to try to learn?” His reply was that he didn’t want to be the only one riding with training wheels.  In other words, he didn’t want to get left behind. When you struggle with learning a new skill, remember….you learned how to ride a bike without training wheels, you can do this! Don’t get left behind!

Former NCAA coach of the year Jim Richardson will contribute on Swimfever.com

Today’s news brings the addition of the widely respected and accomplished Jim Richardson as a site contributor. I have been blessed to be able to know and work with Jim doing a coaching “exchange program” per se during the summers of 1995 and 1996. I spent that time in Ann Arbor working and watching how both he and Jon Urbanchek ran the highly successful Michigan swimming program while explaining to them how we ran our sprint program at UC San Diego. It was one of the most valuable learning experiences as a young coach to better understanding middle and distance training philosophies.

“I am excited to join Doug Boyd and Swimfever.com in the effort to create a place where we can discuss both old and new ideas to enhance learning and skill development. Prior to my 30 year stint as an NCAA swimming coach, I taught high school and coached age group swimming for 9 years. While it is certainly exciting to work with Olympic and World Championship swimmers, for me, it is just as exciting to watch a young swimmer grasp the concepts behind technical improvement. Once they understand the “why and how”, they are more likely to experiment and discover what works for them.

It is not enough to know what to do, it is just as important to know how to teach it. My greatest frustration as a coach was to spend time on technical improvement and then to see no changes when the swimmers raced. This frustration led me to research motor learning theory, attribution theory, and the physiology of building neural connections. In this regard, I have been greatly influenced by scholars such as Dr. Carol Dweck, Dr. Martin Seligman, Dr. Anders Ericsson, Dr. Bruce Lipton, Vern Gambetta, and the research of Daniel Coyle and Geoff Colvin. Along with Doug, I will try to bring information to this site, which will hopefully allow us to speed up the learning curve, both in and out of the pool.”

Jim’s contributions will begin tomorrow with his thoughts on how we as human’s learn.

Why did I leave a career in college coaching,

which I truly loved, to create Swim Fever?

I believe that I can contribute the most to my profession by teaching swimmers what I have learned as well as the “how and why” of stroke technique, which has formed my philosophy of coaching.

Competitively swimming from the age of six through college and then internationally for the USA through the age of twenty-seven was exciting, fulfilling and rewarding.  As most coaches will reiterate, however, an opportunity to coach and contribute to a successful team and the careers of individual swimmers can be more rewarding than a successful personal career.

Over more than a twenty-five year college coaching career I have been privileged to coach at some great universities and alongside multiple talented and experienced coaches. Since then I have come to realize that my contribution to this sport needed to be more than JUST team coaching. This is why I started Swim Fever.

Swim Fever’s mission is to offer an opportunity for competitive swimmers to learn and explore the logic behind what allows their bodies to go forward most effectively in the water. This philosophy centers on teaching the athlete how to become more aware of their body’s movement in the water and how to PRACTICALLY apply those movements effectively to their swimming. While the “story” or “theory” behind how the skill is very important, what is more important is how we APPLY those skills to swim faster and more efficiently.